Or "What to do about those prospects who seem to be ignoring you."

Hysterical, right? Sure.  But. George's "thing" is also a great conversation starter with a stalled prospect.

Of course, you have done nothing wrong in your sales cycle.  Ms. Prospect has just stopped returning your emails and voice mails.  The opportunity has stalled.  It never even got to the proposal stage, so there's nothing to withdraw.  What now?  You KNOW they would see major improvements and achievement if only they would buy from you.

It's time top pull out the "Costanza Tactic"  AKA the "it's not you, it's me" move.  Here it is in practice.  This is an actual email exchange from yours truly to a VP at a prospect of mine:

Of course, I have an interest in re-connecting with you.  But really, I am wondering where I went wrong or misstepped with you. Do you have 15 minutes or so to let me know?

No misstep, just priorities/timing/resources… the usual.

As always, feel free to reach out to [Connie] to coordinate.

After coordinating with Connie, I have a phone appointment "hard scheduled" for next week.

I would like to think that taking the blame disarmed Peter and has made him feel a little bit guilty about ignoring me the last couple months.   Now, I have the opportunity to figure out if we can re-ignite our buy-sales cycle or know for sure that there is nothing there – it's disqualified.

My goal for the call, though, has to be low – I merely want to connect again with Peter.   Are the goals, issues and challenges still present as they were last year? What has he been doing about them since we last talked?  Has he learned of any new capabilities he thinks he needs? Basically, a restart of the CustomerCentric Selling(r) process.

But what if I had misstepped at some earlier point?  Did I assume too much the last time we talked?  Did my mannerisms bother him?  Maybe he didn't like how I discussed his situation or my company's capabilities. Was I dressed inappropriately?  Too Casual?  Too Stiff?  My hope in sending the Costanza email is that through the reply email or on a subsequent phone call, Peter would shed some light so I can improve.

At the end of the day, I want to learn from my mistakes and grow my business.  The "Costanza Tactic" will help me either restart opportunities or help me improve.  Either way, I win.  After all, didn't Aristotle or Confucius say that man should always strive towards self improvement?  Or was that Kramer? 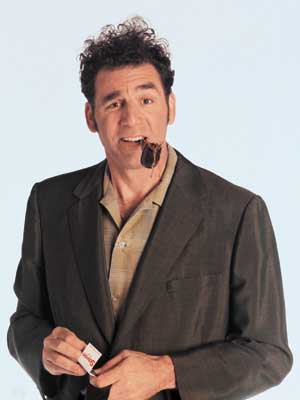